WARNING: While these 21 techniques take minutes to learn… and the results will last you a lifetime, they’re NOT a magic pill. You will still have to do the hard work and implement the techniques in your life. You will have to practice them. If you want a magic pill, save yourself the time and close this page now.

Everyone has an inner voice.

While it can sometimes give you pretty good advice, it usually tells you things like “I’m not good enough”, “I’m not strong enough,” or “everything sucks.” … And that’s a risk to you and your life & business. I call it your “Little Voice”

Your Little Voice has the power to take you into downward spirals, take you off track, or convince you to do something you otherwise wouldn’t.

How many times have you argued with yourself over a good idea? 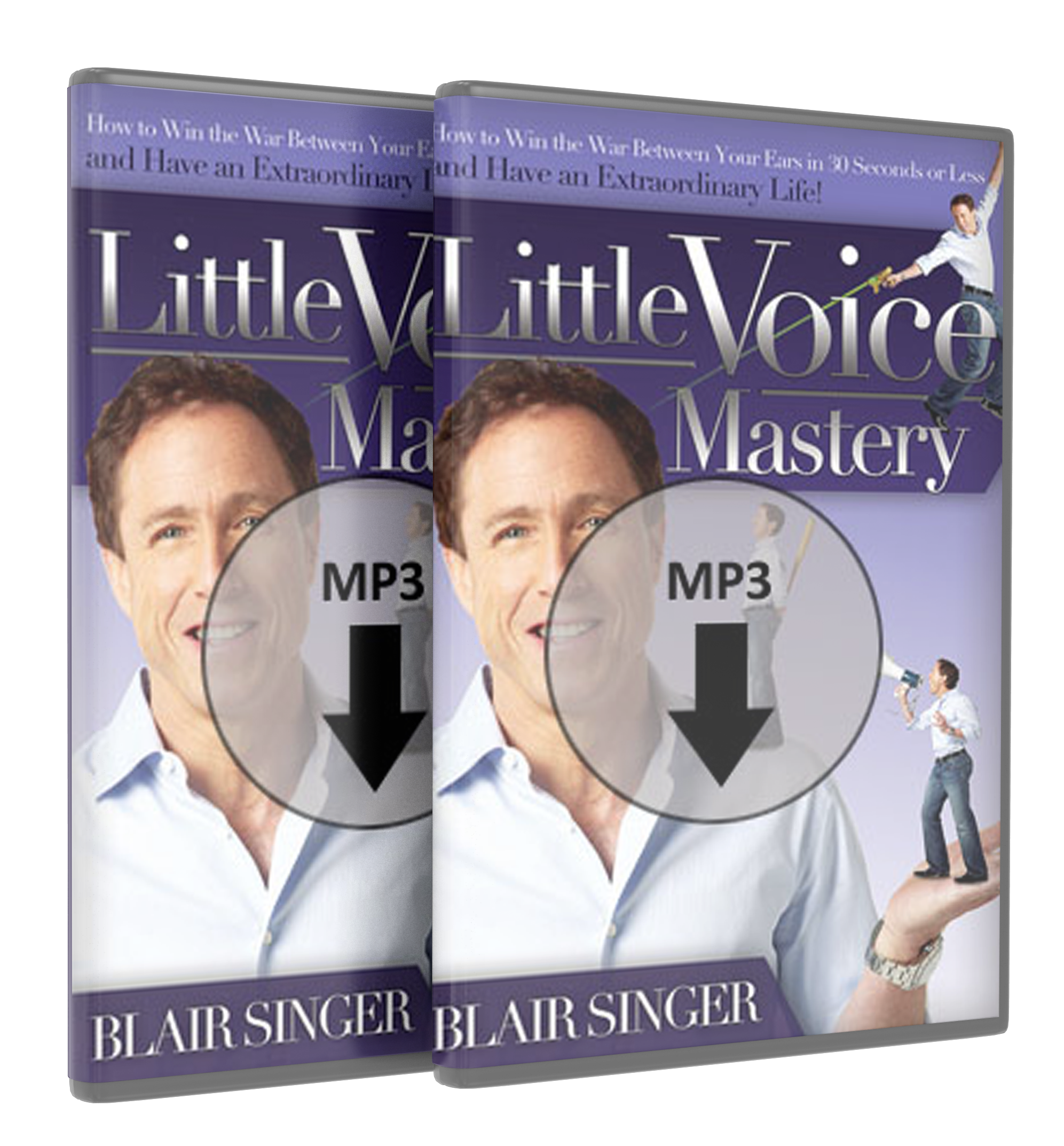 If your Little Voice works overtime like mine, keep reading, because what I’m about to show you can help you win the war between your ears forever.

If you want to…

There’s a lot of pressure associated with running a business. One wrong move, and your family doesn’t eat. Mistakes can lead to having to lay people off… or create liabilities that could land you in court. Fear and mistakes can invite public humiliation, embarrassment, financial destruction, divorce, and more.

Take a singer, for example… Performing is part of their business. Tickets and merchandise are for sale, and the performer draws the audience. The performance supports album sales.

Imagine… What if you were a performer who was afraid to perform?

Stage fright could ruin a career.

That’s exactly what happened to Barbara Streisand. She’s one of the greatest singers of all time, and it might surprise you to know there was a period of about 27 years where she didn’t perform because of stage fright.

It was crippling, and made her violently ill. Her Little Voice was debilitating and sabotaging her career and business. More than once she’s pledged she was done with singing in public forever.

Streisand has said in interviews that she’s her own worst critic, and has a hard time getting out of her own head onstage. That’s her Little Voice getting in the way to sabotage her (and disappoint her fans).

To win the war between her ears, Barbara hired a coach to help her overcome that stage fright.

Now she doesn’t get nervous anymore. And her performance demands premium ticket prices.

What’s that mean for you?

Imagine… You armed with the same powerful techniques taught to Barbara Streisand to help her overcome a high-stakes fear, and allow her to command some of the highest ticket prices in the industry.

Imagine how much she probably paid her the coach she hired? If you’re thinking “Probably an arm and a leg,” you’re probably right.

Would It Be Worth an Arm and a Leg?

Think about it, though…

Would it be worth it if you had even more confidence and less self doubt?

What if you could stop feeling victimized or out of control?

If it could work when the stakes are high for Barbara Streisand, imagine what the same technique she used to get unstuck could apply for you in your business?

How would life change?

I’m going to show you how you can access these 21 techniques in a moment, because … Listen…

There was a time when I was second guessing myself, hesitant to make the moves in life and business. I was even afraid of becoming successful. I didn’t want to live that way. It was a huge moment whenI realized the only thing stopping me was what was going on between my ears.

That’s why I’ve invested over $500,000 in the past 30+ years on personal development programs, seeking out gurus seeking out the best people on the planet to help me with my Little Voice. I didn’t get to where I’m at in life and business without investing in myself.

One of the coaches I hired was the exact same coach Barbara Streisand hired  to help her break through her stage fright. The technique he used to help her is one of the 21 Little Voice Mastery Techniques, and it can be applied to all kinds of limiting beliefs your Little Voice forces on you.

Some of the 21 techniques are mine, and some I learned working with the greatest coaches in the world..

Little Voice Mastery Techniques is like having your own Little Voice coach to help you learn how to master it.

When the game was close and seconds mattered most, his teammates knew to get him the ball because he’d be sure to make the last shot. And so the same process that he went through when he was on the basketball court to get that present that strong that focus is also one of the techniques on this thing.

Think about a time when you were under extreme pressure, in a tough situation, or your back was against the wall… did you come through, or did you choke? Imagine if you had Michael Jordan’s ability to perform under pressure. What if you knew the exact technique MJ used to make it happen? That’s one of the Little Voice Mastery Techniques.

Andre Agassi was one of the greatest tennis players of all time. There was a time when he went into a very steep slump, and couldn’t get himself out. He couldn’t seem to win a tournament.

He worked with a coach on his mindset and came back stronger than ever. Many people believe this comeback is what ascended Agassi from a great player to a tennis legend.

Have you ever gotten totally discouraged and off course? Have you ever in your life been in a prolonged slump? Or have you ever been unable to figure out which end is up and what to do next? Then you can relate to what Andre Agassi went through.

The good news is, the same coach that worked with Agassi also coached me. The same technique is one of the 21 Little Voice Mastery Techniques to help you out of a slump quickly.

It’s techniques like these that helped me and countless entrepreneurs around the world master their Little Voice… And it’s the reason why I say they’re easily worth more than $500,000 to me.

The good news is you won’t have to invest nearly that amount to access your own Little Voice “Coach” to:

This audio program is so powerful…

Little Voice Mastery Techniques is like having your very own Little Voice coach on call 24/7/365.

The only way you could get your hands on it was if you were a student in one of my high tier programs, and it was offered as part of the enrollment. Those programs typically range from $2,000 to $10,000.

The good news is, you won’t have to hire $500,000 worth of coaches, and you won’t have to enroll in one of my high tier programs to gain access to the same techniques Michael Jordan, Andre Agassi, and Barbara Streisand used when times were tough and the stakes were high.

Mastering these techniques has brought millions of incredible opportunities, exquisite relationships, supreme health to those who use the Little Voice Mastery Techniques.

You can win the Battle Between Your Ears by reprogramming your brain in 30 seconds or less.

The only thing stopping you from taking action now is what’s going on between your right ear and your left ear… That’s your Little Voice. Let’s master your Little Voice together. Click the button below now for access to all 21 Little Voice Mastery Techniques.

It’s All About Mastering Your “Little Voice”

Blair Singer has been one of my very best friends for over 27 years. He is a great communicator, a great teacher and a great human being. Like he says, when it comes to winning, it’s all about mastering your “Little Voice.”

entrepreneur and friend for 27 years

I Recommend This For Anyone Who’s Ready…

In “Little Voice” Mastery, Blair brilliantly identifies how we all have a “Little Voice” between our ears that controls our thoughts, and therefore actions, and how, too often, our “Little Voice” is negative and self-sabotaging.

“Little Voice” Mastery provides easy-to-follow tools and techniques to help you take charge of your “Little Voice.” I recommend this for anyone who’s ready to create the life they’ve always wanted.

Author of #1 NY Times Bestseller Secrets of the Millionaire Mind

…What Blair taught me was that I had always focused so much on how to “do” something that I didn’t pay the appropriate attention on how to “be” something. I started asking different questions and consequently getting different answers.I started the pursuit of becoming the kind of person who possessed the goals I wanted for myself rather than pursuing what to do. Doing has its place, but “being” is the foundation on where it’s done. It is easy to teach someone what to do. Teaching them how to “be” is a different story.

Blair’s ability to teach solid principles and techniques on how to improve my “being” has allowed me to reach heights I use to only dream about.”

author of The Success Compass

I have had a really big problem with my little voice getting too loud (especially lately) and I’m happy to have some tools to silence that little sucker. I’m also pleased to have connected with some people who would have me be as big as I always thought I truly can be. I thought I had BIG in me and… well let’s say …I feel more confident in that fact than I believe I ever have. One more thing, My little voice doesn’t stand a chance to hold me back anymore.

I Will Definitely Keep Using It To Take Me Even Further

For 40 years my little voice has been keeping me from succeeding in anything I tried. Since starting the “Little Voice” program in December and being coached with your local representative in the Toronto, Ontario area, I have totally been achieving much success.For the months of January and February I have been # 9 and 10 on the top four figure income earner’s list as well as doing “boot camp” training for my company for the last three months. I have gone “cold turkey” in the last week from my TV “addiction” (hiding in front of the TV 6 or 7 hours per day).

Although I may have accomplished all of this in the future, I know that it is the “Little Voice” program, that I listen to most nights before going to sleep that has helped me to achieve these accomplishments sooner rather than later and I will definitely keep using it to take me even further – even to top 5 income earners list.