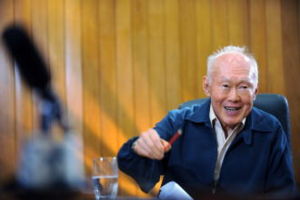 On Sunday March 29, 2015, Singapore and the world will pay their respects to Lee Kuan Yew who passed away at the age of 91 this week. While he is now physically gone, his spirit and legacy will endure for generations to come.

He was the founding father of Singapore and responsible for taking a small city with no natural resources and lots of instability all around, and creating the second wealthiest economy in the world.

As an American, I have traveled to and worked extensively in Singapore over the last 20 years. I have worked with tens of thousands of amazing people and companies there. As a student and teacher of leadership, team and cultural development, I found him to be a model of vision, commitment, and passion. Controversial and determined, but a strong leader nonetheless.

Charged originally with the task of unifying and holding Malaysia together, he failed. Yet as any great leader, he used his setback to springboard ahead with a bigger game which was to create a new country Singapore.

Many criticized him for his heavy hand and for his restrictive domestic policies. But through it, he created an economic miracle. Why was he so successful?

He faced a complete mixed bag of multiple religions, nationalities, and cultures, each group with their own rituals, habits, strong views, etc. Views that in fact in neighboring countries caused major upset, conflict and strife. His vision was a Singapore were ALL people of ALL cultures would work together for the betterment of one society.

In all of his dealings, there was never one ethnic or religious group that was shown extra favor or slighted. Malay, Chinese, Indian, Buddhist, Christian, Islamic were all treated equally. This was a tremendously difficult task but one that made Singapore great. Tough laws, tough rules, tough consequences led to a standard of living for ALL Singaporeans that resulted in one of the safest, cleanest, best educated, wealthiest, most productive, tolerant, corruption-free and peaceful countries in the world.

His success… it was never at the expense of any group. He was a tough guy, but with a heart bigger than the city itself with an unwavering belief in the resiliency and strength of the human spirit. He never doubted that this rag-tag city-state on a marshy island could be transformed into a crown jewel based upon no other resource than that of its small population.

While I never met him personally, I felt that I knew him well. Whether I agreed with all of his politics was not the issue. I admired his vision, strength, commitment and ability to honestly move an entire team together for a cause that benefited them all without blame, excuses or favorites. He has repeatedly made me a better leader, teacher and citizen of the world.

His legacy lives on in the spectacular buildings, cultural centers and businesses that rise from the sea.

I feel however, his legacy is best described by an excerpt from one of his famous National Day speech in 1989. He was talking about the subject of emigration of Singaporean citizens. In the speech he recalls his conversation with a young Singaporean whom he interviewed on the subject.

I will read you an abstract from one of them, but let me tell you that this KIND of Singaporean is going to make Singapore succeed. First he said to me, Please make sure that the government says it does care about keeping Singaporeans here. The recruitment of foreign talent is an on-going exercise to propel the country to greater heights. But it is not a solution to the problem of emigration. A different one all together to him.

Explain to Singaporeans that the new-comers are not getting a free ride on what Singapore citizens have built up all these years. That’s him…he served his national service, two and a half years. Yes, he was a scholar abroad in Cambridge… but he points out, Singapore is not a hotel where people come and go! Then he says, All reasons given by the ministers for staying, are materialistic, rational calculations. That might be a realistic reflection of the situation

But speaking for myself, the single most important reason, is that Singapore is MY place! It is something that I call mine! Never mind the many constraints.

I never expected this quiet very prosaic, scholarly type with glasses had PASSION. But to build a country, you need passion. If you just do your sums: plus – minuses, credit – debit you are a washout. When we fought in 1962-63 against the Communists. When we went through hell in 1963 to 65, many people thought we were crazy.

We could lead peaceful, quiet lives. Why were we doing this? It was an act of CONVICTION! This is my country! This is my life! This is my people! You will trample over us over our dead bodies! We dug our toes in we built a nation.

Yes, Mr. Lee, you built a nation, but you also taught us all the power of the human spirit of what a group of committed people from all races, colors and religions can create for themselves and their generations to come with inspired honest leadership.

Thank you for your gift of believing in us all.